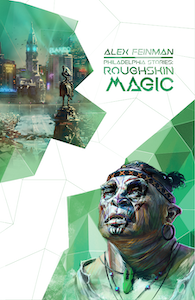 "The usual, please, Rabbit: ears and whiskers, stealth and speed."

Jason Brazinsky is a roughskin, one of the millions whose bodies betrayed them in the Change. Gifted with size and strength, edged out by society, roughskins struggle to fit into a world not quite big enough to accept them. He's found employment doing the unsavory work corporations don't want to own up to. Sneaking into tight spots, and out again, is just what a magical disciple of Rabbit does best.

After a drug delivery goes bad, Jason finds himself back in the run-down side of Philadelphia, hiding out with his ex-boyfriend and hunted by the corporation he betrayed. When corp machinations endanger his friends, Jason has no choice but to strike back. But a seemingly-chance encounter with a handsome, rich stranger changes his path forever.

Jason's penchant for turning foes into friends might help him out of this yet--if he can just decide which man to side with...

Roughskin Magic, from the author of Duplicate and We Were Gods, is an action-packed romance set in a near future torn by late-stage capitalism, climate crisis, and the catastrophic return of magic. 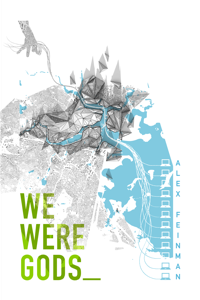 Don Lucas Ferez, captain of the Border Guard, is tasked with keeping the ancient evils out of the peaceful South. When the Four Old Gods reappear, and slaughter his companion, he is first to sound the alarm.

In the real world, Luke Green, Don Ferez's player, is at his wit's end. The Four are the main programmers of the world-spanning game Luke helped create--and they've found a way to subvert the players rich enough to have a Game interface implanted in their skulls. Things get very real, very fast for Luke, as he confronts the collision between in-Game politics and real world criminal activity.

Saving the world is up to Luke, his hacking skills, and his ability to make friends--not a good start for someone who's been out of the game this long.

Acclaim for "We Were Gods"

Note: We Were Gods is rated R for violence, foul language, and explicit sexual content. 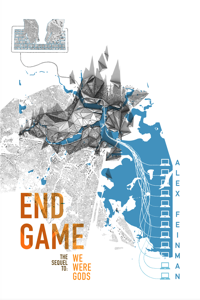 End Game (We Were Gods volume 2)

Game tester Luke Green tried to retire peacefully, hiding in his basement apartment and living off his start-up earnings. But his old boss has had other plans, controlling players through their game implants.

Luke and Toni find themselves in a life-or-death battle where their best chance to survive depends on their ability to outmaneuver, outwit, and, perhaps most of all, out-hack their enemies. 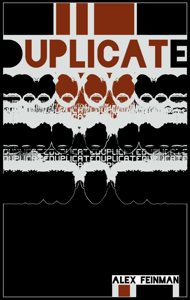 What do you do when your ship is about to hit an asteroid?

Why, you jump in your Corp-provided DupliPod, of course. It's effective. It's foolproof. It's safe. First it records your brain patterns, then kills you. Saves on life support in the deep reaches. The DupliPod will grow you a new body when it's safe; you will awake refreshed and renewed.

Sometimes, it doesn't work quite right.

Duplicate: would you die to save your own life?

Duplicate, published in 2011, is a hard-sf novel in the tradition of Niven and Asimov.

Reviews from Amazon (from people I don't know, even!):

Note: Duplicate is rated PG for some violence and creepy situations.

The text is also available under the Creative Commons BY-NC-SA license; let me know if you want a copy of the text in order to create derivative works, or any other reason.